Practice of fake subpoenas to be stopped by Orleans DA 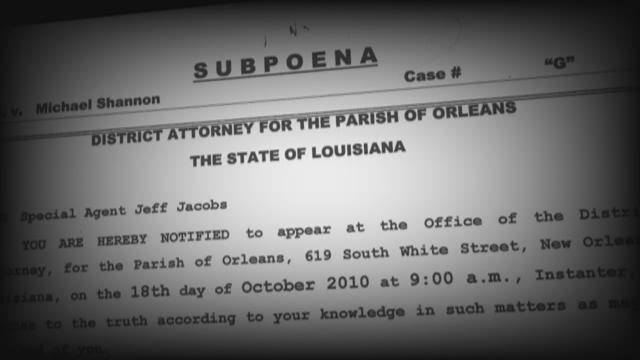 NEW ORLEANS - For years, The Orleans District Attorneys office under several DA administrations, sent some witnesses written notices with the word "Subpoena" on the top, notifying them if they didn't speak with prosecutors, they could be forced to pay fines or even serve jail time.

The prosecutorial practice was first reported by the investigative website The Lens.

Thursday, District Attorney Leon Cannizzaro told WWL-TV, his office is dropping the subpoena heading from its notices and admitted the DA's office does not have the power to simply issue a subpoena without a judge's okay.

The amended document now reads as "Notice to Appear."

The DA's use of the so called subpoenas was a topic of discussion at the New Orleans City Council Criminal Justice Committee hearing at City Hall.

"I understand the public safety aspect of wanting with all your being to get the witness to come forward.," Guidry said. "But, if it can't happen legally, then it shouldn't happen."

"It might even be prosecutable," Williams said. "There is nothing in the Code of Evidence or Code of Criminal Procedure that allows a district attorney or a prosecutor to do this."

Williams added that the revelation of "fake subpoenas" has the potential to overturn some criminal convictions.

"There are no consequences, there are no legal consequences for the person who is the subject of that notice if they do not show up," Cannizzaro said. "No case has been presented to me where someone was arrested because they failed to honor a District Attorney's notice."

Loyola Law School Professor Dane Ciolino said sending out a document, stamped as a subpoena is unethical and potentially a violation that could be investigated by the state judiciary committee.

"The DA is supposed to file a motion, go before a judge ask for the issuance of a subpoena from the court," Ciolino said. "That isn't the way the District Attorney's Office is currently doing it."

Cannizzaro maintains his office only used the so called subpoenas to to bring reluctant witnesses into their office and to help make good cases against bad people.

"I don't want to be the one that says we're just going to dismiss the case, we're not going to try and get evidence against this violent offender," Cannizzaro said. "I don't want to put that type of person back out on the street."

As of this week, the District Attorney Subpoenas will no longer be used.