COVID's impact on Zulu is immeasurable

To get back to the level of celebration for Mardi Gras so many of us miss, the pandemic requires a mass response. That applies to people of every color. 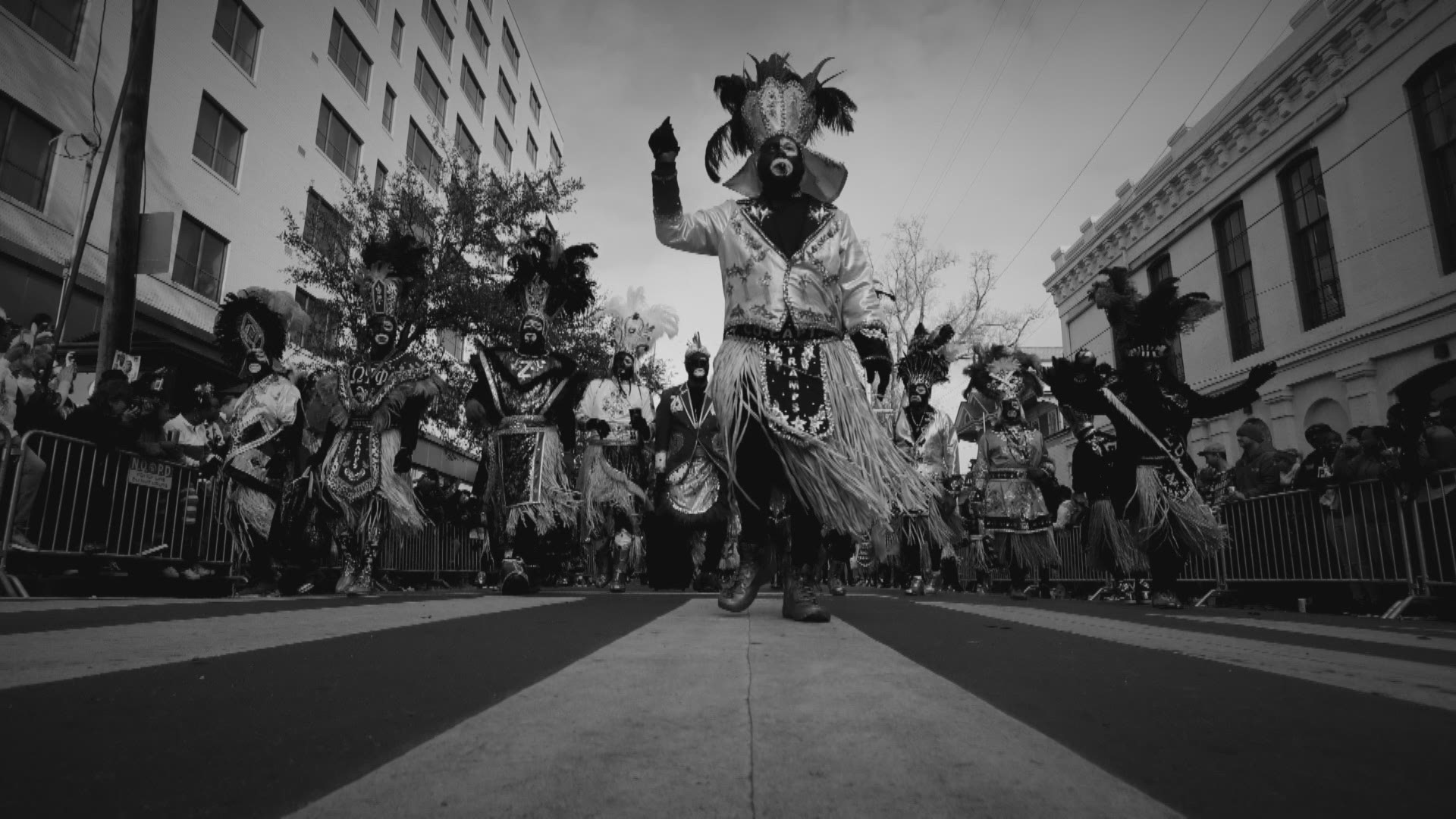 NEW ORLEANS — To see Zulu floats this Mardi Gras, you have to find them. One is the house float at the home of Jay Banks, a New Orleans City Councilman and chairman of the board of directors of the Zulu Social Aid and Pleasure Club. We asked Councilman Banks for his thoughts on how to celebrate Mardi Gras during a pandemic.

The majority African American Krewe is trying to find the right balance of celebration after it lost an estimated 17 members to the Coronavirus. That includes King Zulu 2007, Larry Hammond, Joseph Sumter Senior, Robert Gray, and Cornell “Dickey” Charles, a part of Zulu’s Governor's crew. Charles was 51.

"He's not feeling too good"

“As a family member, every Sunday that was my stop after church. I would stop at my daughter’s house. He would be in the kitchen cooking. He always loved to cook and boil. When I come in the door he would say ‘father-in-law I got something new I want you to try’ and I would sit down and be the guinea pig,” said Burnell Scales, Charles’ father-in-law.

The regular Sunday visits Scales made to his son-in- law’s home stopped not long after Zulu’s parade on Fat Tuesday last year.

“The last Sunday I saw him, as usual, I stopped at the house after church. Normally he would be in the kitchen cooking. He wasn’t in the kitchen that Sunday. So, I turned to my daughter and said, ‘well where is Cornell’? She said, ‘well dad he’s not feeling too good, he’s in the bed’. I thought it was a slight case of the flu or whatever. It progressively got worse the next few days. He went to the doctor they sent him home and he had to go back. In the next few days, my daughter told me they put him on a respirator and a week later she called and told me that he had passed,” said Scales.

Scales also rode in last year’s parade. He too contracted COVID-19 but survived. On the day we met him near the French Quarter, Scales proudly wore a t-shirt that said he survived the virus. Zulu members said there’s no question the virus was moving through its members and the city last Mardi Gras, an unimaginable super spreader by today’s standards.

“Without a doubt and we can quantify this. One of the first deaths, there was a member Lasalle Rattler. Lasalle died on the day of the ball. At that point, we knew nothing of COVID, subsequently, though, they have determined his death was COVID, but we didn’t know that when he died on the day of the ball. COVID was very much here before Mardi Gras and people got sick,” said Jay Banks.

“Mardi Gras showed us pretty early on that there were going to be some significant disparities in terms of who was affected,” said Dr. Jennifer Avegno.

“Once it started it wasn’t uncommon for us to have one or two deaths a month,” said Elroy James.

James is the current president of Zulu. He said knowing that members were dying from COVID and others becoming ill, the organization took the pandemic seriously. James says Zulu’s members took the necessary precautions to protect themselves.

“This organization, predominantly black men, I think health disparities are real. So, you start thinking about the health and safety of members. How many of them have underlying comorbidities that make them vulnerable. So, a lot of anxiety was found. Most of us walked around with a lot of anxiety. As leadership what you try to do is be prayerful and give some beacon of hope,” said James.

With the pandemic causing so much uncertainty, James made the decision to suspend the election of King Zulu and characters. That’s something that hasn’t happened in recent history.

“The suspending of royalty and not having elections, in my time history does dictate that it has happened before, it was during WWI and WWII. Those years we did not sit royalty,” said James.

Historically, Zulu has represented the black culture in New Orleans. During this time, it may reflect the impact COVID-19 is having on the broader community of color.

Within the last year, Jackson said the pandemic has taken 27 people in his circle. They were family, friends and co-workers. Jackson said it seems impossible to process the losses.

“You don’t, it’s very tough. You drive by things, certain things remind you of certain people and then you have to remind yourself, oh, the person is no longer here,” said Jackson.

He thinks of his friend Christopher Mark. He was a veteran of the Marine Corps and then the Army. Mark was 46 when he died of COVID last April. A video on Facebook showed Mark’s family receiving his American flag at his burial ceremony.

“A three-time veteran. He had served in Iraq twice, Afghanistan once, served in Panama, served in Somalia, three tours of active duty. He died on a ventilator in a veteran’s hospital,” said Jackson.

“Our black and Hispanic residents, not only here but nationwide are more likely to be hospitalized and more likely to die,” said Dr. Jennifer Avegno.

That’s the harsh reality for people of color during this pandemic said Dr. Avegno. She’s director of public health for New Orleans. Avegno said recent data compiled by the state of Louisiana shows that while blacks do make up most of Orleans parish, they’re dying at a higher rate. There’s a 22% disparity in COVID deaths relative to their percentage of the population.

In Jefferson Parish, where the black population is smaller, that disparity is even higher at 67 percent. Avegno said some of that can be attributed to underlying health conditions, but she said we can’t ignore so-called social determinants and the long-standing inequality in economics and access.

“When your income is restricted and you live in a food desert and you don’t have access to healthy foods, fresh foods, you don’t have safe places to exercise to walk because the streets are falling apart, or you live in a neighborhood that is plagued by crime. You historically have not had access to preventative medical care that can help keep your diabetes in check and healthy either because of insurance issues, where really frankly, because of systemic racism all of those make your diabetes even more concerning,” said Dr. Avegno.

The Lower 9th Ward is a prime example of what Dr. Avegno is talking about. In the predominantly African American neighborhood, there are no major supermarkets, only one small market sells fresh food there. After a CVS closed last summer, it left the Lower 9th Ward with no pharmacy.

“We haven’t really changed anyone’s living situation. If you’re an essential worker and you still have to go to work, the economic support for folks to stay home has been spotty. It’s just not a reality for many people. So, while I’m glad fewer people are dying, I don’t know if we fixed the inequity problem just yet,” said Dr. Avegno.

Avegno said soon after the pandemic began, the City of New Orleans deliberately brought COVID testing sites to communities of color so a lack of transportation wouldn’t be a hurdle. Avegno said a similar approach will be taken to distribute COVID vaccines when that time arrives. Avegno admits that in highlighting the disproportionate impact of the pandemic on minorities, other populations may perceive that to be a problem that won’t pose as much of a threat. Councilman Banks said that has led to behavior that he and Avegno described as calloused.

“Look, that’s been a problem from the beginning, but then you got to cross the line. When you get young Caucasian healthy people that are dying then it puts a different spin on it. Because all of those criteria that you could dismiss you can’t dismiss. We just recently had a tragedy with a very fine young man who I knew. The representative who was elected and didn’t get a chance to serve,” said Banks.

Banks is referring to Congressman-elect Luke Letlow. After winning his election in November he was hospitalized with COVID-19 a short time later. Letlow died from COVID four days before he was to be sworn into office last month.

“He had none of those underlying causes. He wasn’t black, he wasn’t overweight, he wasn’t old but he’s a COVID victim. So, when people look at this thing and say ‘hey look, it’s only going to affect certain folks’, yeah, until it affects you. Then it ain’t certain folks no more. It’s all of us,” said Banks.

To get back to the level of celebration for Mardi Gras so many of us miss, the pandemic requires a mass response. That applies to people of every color.