The governor's new order, on Phase 1, will be good until June 5. 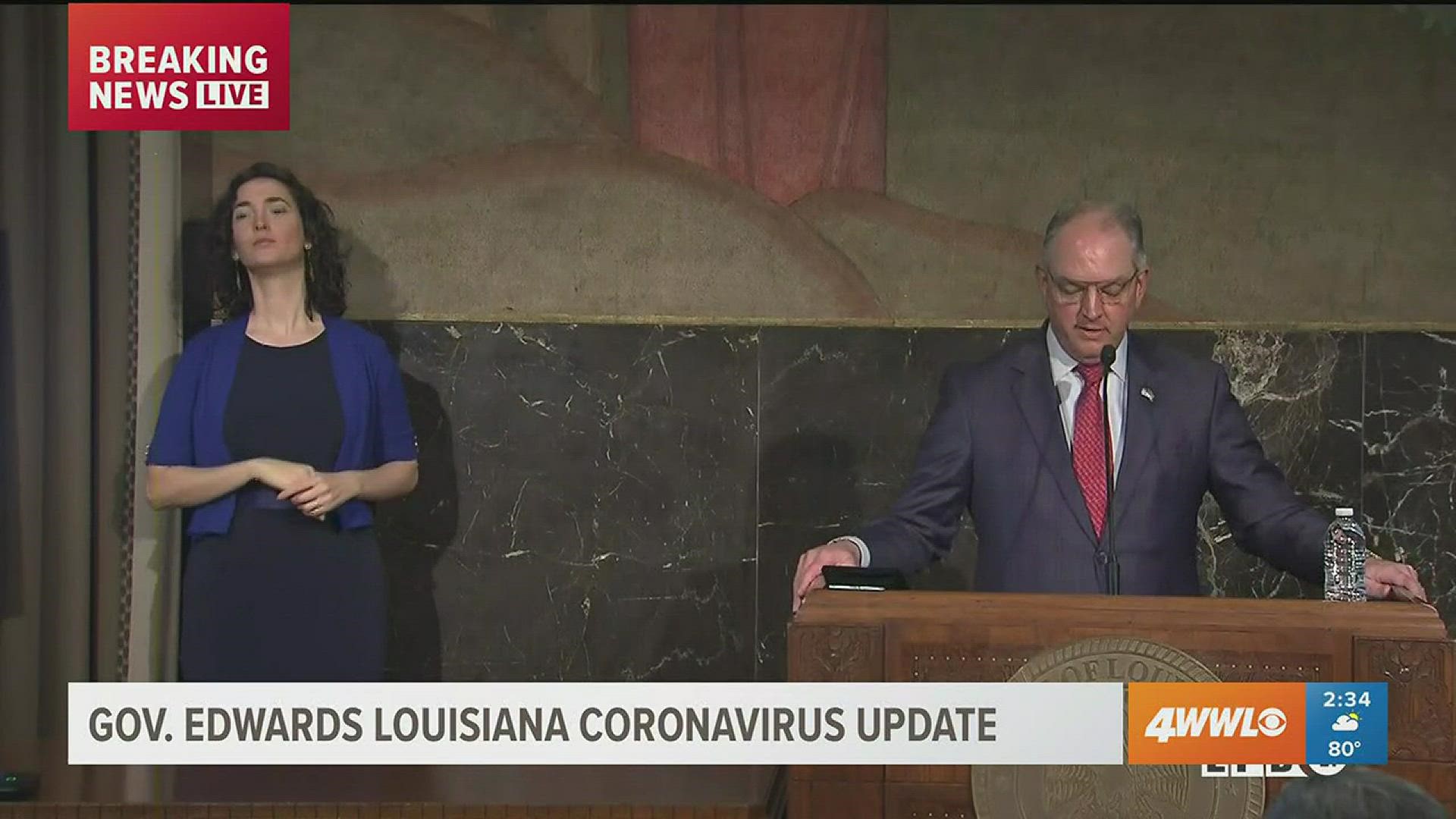 NEW ORLEANS — Louisiana Governor John Bel Edwards said he will have a new order out Friday that begins Phase 1 of reopening the state after it has been shut down for nearly two months due to the coronavirus outbreak.

The governor's Stay at Home Order expires on May 15, meaning some businesses will be allowed to reopen in a limited capacity the next day.

"The people of Louisiana have worked really hard since this public health emergency was announced," he said at a Monday press conference.

Edwards said that Phase 1 will last at least 21 days and that a new order is expected no earlier than June 5.

RELATED: 10 things you can do as Louisiana eases coronavirus rules

"We still encourage you only to go out with people in your household," said Edwards, who said that restaurants, which will be limited to 25 percent of the State Fire Marshal recommendation.

Edwards said that restaurants need to have six feet between customers and 10 feet between tables, but that outdoor dining would still be allowed as long as social distancing is observed.

While the governor announced the relaxed standards statewide, individual areas are allowed to be more stringent.

The city of New Orleans Mayor LaToya Cantrell said that while the city would begin opening slowly this weekend, the city's restrictions would likely be stricter than the state as a whole.

The order closed some businesses outright, and in practice closed the doors for almost all of the state's "non-essential" workplaces by encouraging employees to stay home.

More than a month since that order went into effect, Louisiana has seen unemployment surge alongside the rest of the nation, with double-digit unemployment across the state and the highest rate of unemployment in the U.S. since the Great Depression.

With nearly every state in the U.S. under some form of economic lockdown, the White House released guidelines for how the states should evaluate whether they are ready to reopen.

How the reopening would phase in

Phase 2 allows gatherings of up to 50 people. Schools can reopen. Bars can reopen with limited standing room occupancy.

Edwards has repeatedly said he is following those guidelines for his evaluation, focusing on the number of new cases, hospitalizations and testing. White House officials say the first two must be decreasing consistently while the number of tests increases for a state to consider reopening.

Louisiana seems to be hitting marks

And Louisiana appears to be following that trend. Since hospitalizations peaked on April 13, the state has seen a steady decline in the number of people in hospitals and the number of hospitalized patients on ventilators.

The number of new cases reported has remained relatively steady since the beginning of April, with daily case increases ranging between 200 and 800 new patients.

Most days, there are between 500 and 600 cases reported. But the number of tests has continued to increase in that timeframe, meaning that the percentage of people testing positive has slowly decreased over the course of the outbreak, especially since the Stay at Home Order went into effect and its effects began to make a dent in the data.

These positive signs have already led to some relaxation of the stay at Home order. At the start of May, Edwards said he would allow limited patio seating to reopen for restaurants, throwing a lifeline to struggling restaurants.

Non-emergency surgeries are expected to restart Monday after surgeons were advised near the start of the outbreak to reschedule all elective procedures.

GOP state lawmakers, emboldened by the fact that some of the state's hardest-hit places -- metro areas such as New Orleans and Baton Rouge -- have begun a downward trend for new cases, have been applying pressure to the Democratic governor to begin reopening the state's economy.

A House committee voted 9-7 Wednesday to advance a proposal to strip Edwards' ability to penalize businesses that don't comply with his order for 15 days from passage. It would have to win support from the House and Senate to take effect. Both houses of the Louisiana Legislature are Republican-controlled, but some have been hesitant to reopen too soon.

Edwards has repeatedly said during press conferences that the virus' spread is uneven throughout the state. While places like New Orleans are improving, some of the more rural parts of the state, where testing is not as readily available, are still seeing increases.

Other states nearby have already started reopening. Texas reached Stage 2 of reopening on Friday, meaning that state's hair salons, barbershops and other beauty businesses were allowed to reopen.

In Texas, like Louisiana, cosmetology and other personal grooming businesses were ordered to close because they require close physical contact to operate, breaking social distancing practices.

Florida, which has been under national scrutiny for Gov. Ron DeSantis’ response to the virus amidst Spring Break season, has been under Phase 1 of reopening for about a week.

But many health experts say despite the economic burden of continuing social distancing, states may be moving too fast. According to a report from NPR, epidemiology professor Bob Bednarczyk with the Rollins School of Public Health at Emory University in Atlanta compared the reopening in many states to a Japanese island that quickly backtracked into a second lockdown.

"The early lesson that was learned, really, we learned from the island of Hokkaido in Japan, where they did a really good job of controlling the initial phase of the outbreak," Bednarczyk told NPR.

With improving numbers, the island lifted many of its restrictions. When a second wave of infections hit, positive cases and deaths surged and Hokkaido was put on a second lockdown 26 days later.

None of the Phase 1 openings have been in place long enough to see if they have led to a resurgence of the coronavirus in those states. The virus's incubation period of about two weeks means it will likely be delayed for Louisiana as well, once the state reopens.

Edwards has not ruled out returning to a Stay at Home Order if cases spike a second time during the reopening process.

On Friday, he outlined his plan to hire workers for contact tracing, a process where people who have had close contact with the virus are contacted and advised to self-quarantine.

He said the state planned to hire 250 new contact tracing workers, and said the number of new hires could be as high as 700 if needed.

Dr. Alex Billioux, the Assistant Secretary of Health for the Louisiana Department of Public Health, said that aggressive contact tracing is crucial to allowing the state to reopen safely.

Billioux said that contact tracers would be asking someone who tested positive to give them a list of people they have come in contact with and where they have been.

The City of New Orleans is planning to help the contact tracers by requiring businesses to keep records of who shops at their stores.

Mayor LaToya Cantrell said earlier this week businesses will need to keep a list of every person who enters the store when they reopen after her administration's Stay at Home Order expires on May 16.

Cantrell said this process, along with wearing masks when going out and other changes, will be "part of the new normal."

It's also possible that New Orleans and other areas with high population density could stay under stricter guidelines, even as the state reopens.

Edwards has given local leaders the authority to impose stricter restrictions, but not ease up on statewide guidelines. Cantrell has not ruled out extending or reimposing the New Orleans Stay at Home Order if a local surge in cases happens during the reopening process.

RELATED: Rockford Peaches pitcher Mary Pratt of 'League of Their Own' fame dies at 101