It’s just one of the city’s vacant landmarks that has festered and fallen apart for years. 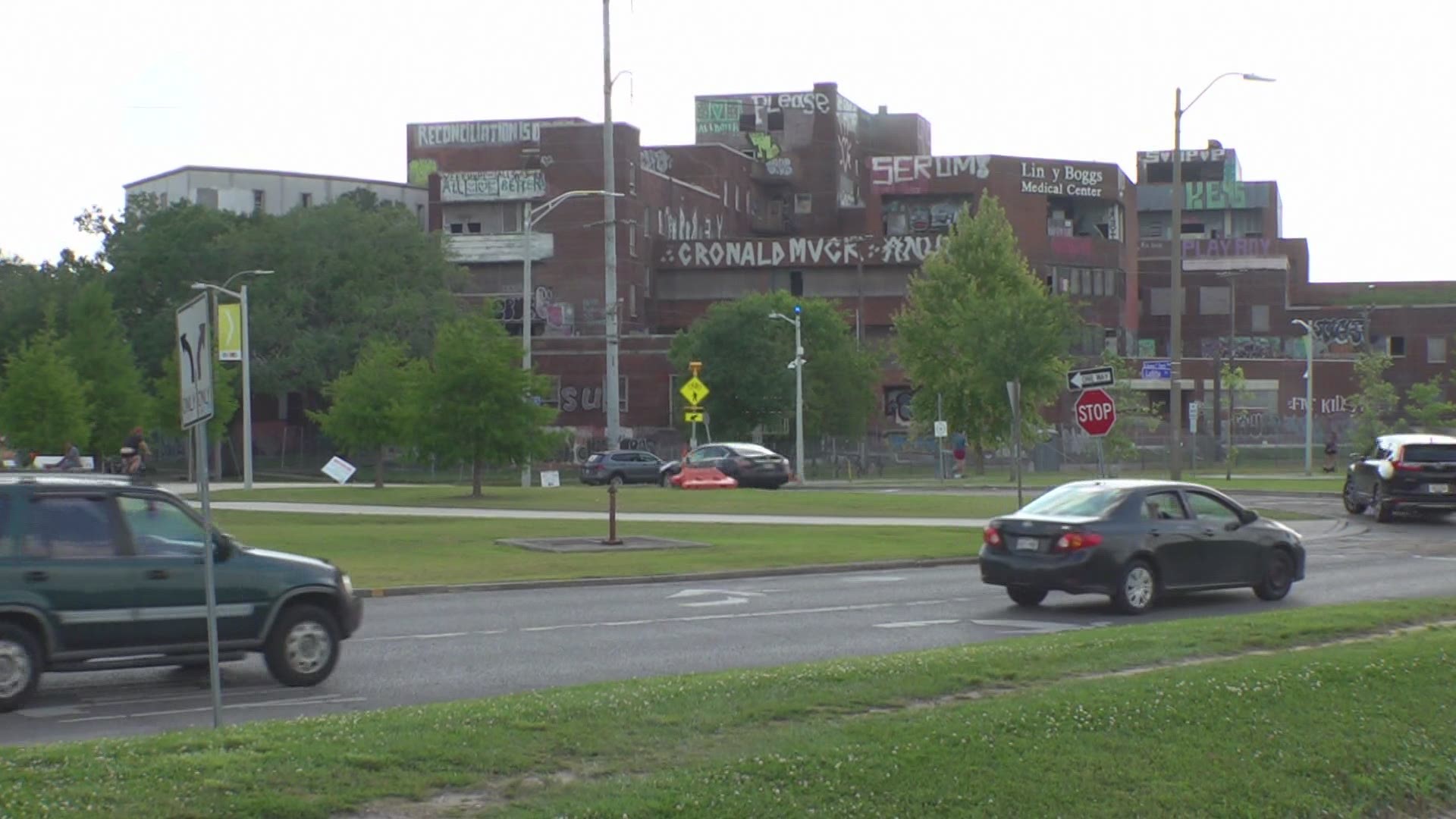 It was a usually busy evening along Bayou St. John recently. Some people relaxed along the banks or kayaked in the bayou. Others ran or rode bikes along the Lafitte Greenway. Looming over it all, ominous as ever, was the old Lindy Boggs Medical Center.

It’s just one of the city’s vacant landmarks that has festered and fallen apart for years.

“We have a lot of residents on Bienville who have been having to wake up and look at this out their front windows every morning for 16 years,” said Chris Blum, president of the Mid-City Neighborhood Organization.

A chain-link fence has surrounded the former hospital since Hurricane Katrina led to its closure. That doesn’t stop people from coming and going.

Meanwhile, the building -- a canvas for graffiti artists -- continues to crumble. Boards have been ripped off of some windows. Other windows are broken.
Several owners have introduced several plans for the building over the years, but none have come to pass.

City code enforcement officers are no stranger to the property, nor is the NOFD that responded to a fire inside the building back in 2019.

Neighbors worry what else could happen inside the empty building.

“If it stays in this state, it will turn into an emergency,” Blum said.

The building is owned by the St. Margaret’s Foundation, a non-profit. A nursing home the foundation opened in 2012 sits right next to the blighted hospital.

“The holdup on the financial markets right now is COVID coupled with perceptions about senior living care and investors being nervous about lending in that area,” Heather McGowan told the neighborhood group on March 8.

“I sympathize. I understand it’s frustrating to, you know, we can’t walk into a bank and line up the millions of dollars that we, you know, need to get the shovels in the ground immediately. And COVID certainly didn’t help things,” she said.

St. Margaret’s did not agree to an interview with WWL-TV.

Blum, the president of the Mid-City Neighborhood Organization, said he’s not happy with the latest reason given the prior broken promises.

“No, I really don’t have very much confidence in any work being done,” he said. “I know development and commercial real estate is tricky and complicated; it’s not something I deal with in particular. But from a resident’s point of view, nobody wants to hear that.”

Blum did point that crews were recently at the old hospital to brick over a door. Work to pump out the flooded basement was about to happen.

While there apparently isn’t money to rehab Lindy Boggs, there was once money set aside to get the city-owned Brechtel Golf Course in Algiers back in operation.

Instead, it has been left to return to nature, creating a nuisance for neighbors.
“At the beginning of the Landrieu administration there was a list of 100 projects that were supposed to get done,” said Rob Zrabkowski, president of the Aurora Gardens Neighborhood Association. “And it was on that list budgeted, I think, for seven to eight million is what sticks in my mind. And nothing ever got done with it.”

Instead, the land -- which was donated for use as a public park -- has been untouched for years.

“There was no attempt to turn it into any other kind of recreation space, Zrabkowski said.

Grass grows wild, weeds pull down parts of the fence, and trash is all around.
“It’s ugly,” Zrabkowski said. “It’s genuinely ugly.”

Recently, a fire gutted the old clubhouse, and while the city put up a new fence across the front, there are still no solid plans for the property. City Hall said after the fire it’s working to make something happen.

“I’d like to see it put back into use. And it’s supposed to be used as a recreation space,” Zrabkowski said.

RELATED: New Orleans' vacant and blighted landmarks: Here's where some of the projects stand