The two were among 15 candidates seeking to fill the seat Cedric Richmond left empty when he accepted a position as an adviser to President Joe Biden. 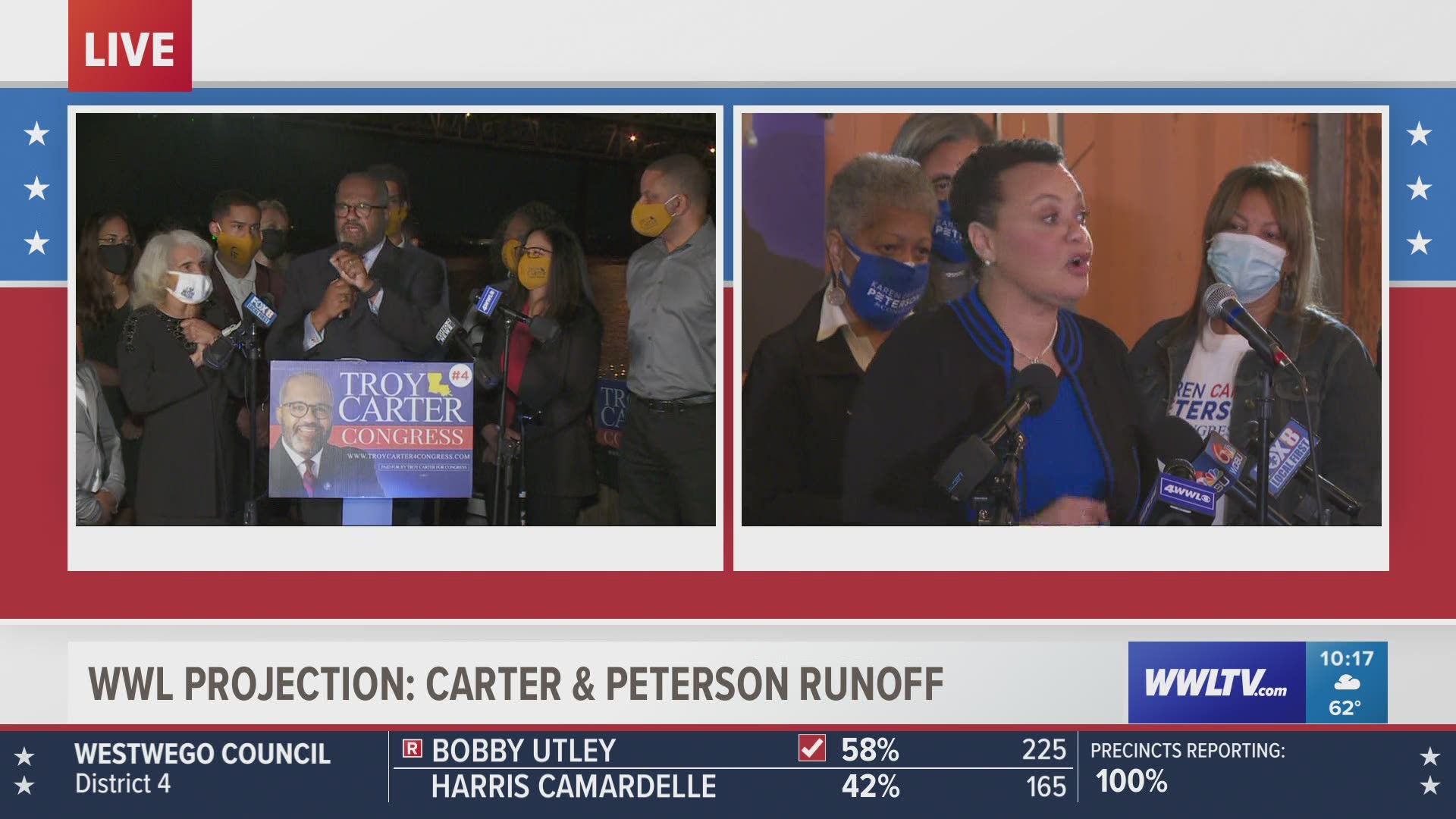 NEW ORLEANS — Karen Carter Peterson and Troy Carter, who sought to replace former U.S. Rep. Cedric Richmond in the state’s 2nd Congressional District, will face each other once more in a run-off April 24, according to WWL-TV projections.

Get live election results on all races here

With 646 of 657 precincts reporting late Saturday night, Troy Carter had 36 percent of the vote to Karen Carter Peterson's 23 percent and Gary Chambers with 21 percent.

"What a night," said Troy Carter. "I am truly humbled and honored for the show of support from this district. The people have spoken and they're ready to move forward. They're ready to build."

"What we're seeing here, so far... All night it's been Troy Carter running in first with close to 40 percent of the vote... Frankly, I'm a little surprised at the gap between the two, but credit Gary Chambers (a Baton Rouge area candidate), who apparently took some votes away from Carter Peterson."

The two were among 15 candidates seeking to fill the seat Richmond left empty when he accepted a position as an adviser to President Joe Biden.

"We still have work to be done," said Carter. "We have a runoff."

Carter Peterson was also emboldened. Despite finishing 13 percentage points out of first, she seemed to take heart that 64 percent of voters did not vote for Troy Carter, giving her a large number to try to win over.

"They want a fighter. A substantial number of voters decided today that they want bold and courageous leadership, they don't want the status quo," said Carter Peterson.

The state senators faced off once before in hopes of winning the office in 2006 against former Congressman Bill Jefferson. Peterson was able to make it into a runoff election, while Carter came in fifth in that race.

Carter, whom Richmond endorsed, told The New York Times that he will easily be able to access someone who has the ear of the president.

Peterson, meanwhile, told the newspaper that her experience working with the Democratic National Committee led to relationships with many policymakers in Washington, D.C.

The state’s second Congressional district includes most of New Orleans, the west bank of Jefferson Parish and snakes its way up the Mississippi River into parts of Baton Rouge.

RELATED: Here's what you need to know for Saturday's special elections

In the 5th Congressional District race, Julia Letlow easily won the election to replace her husband, Luke Letlow, who passed away from COVID-19 weeks after he was elected and just five days before he was supposed to take the oath of office.