The numbers used to track COVID-19 have largely remained flat across the state this week, giving health leaders more confidence the virus' curve is plateauing. 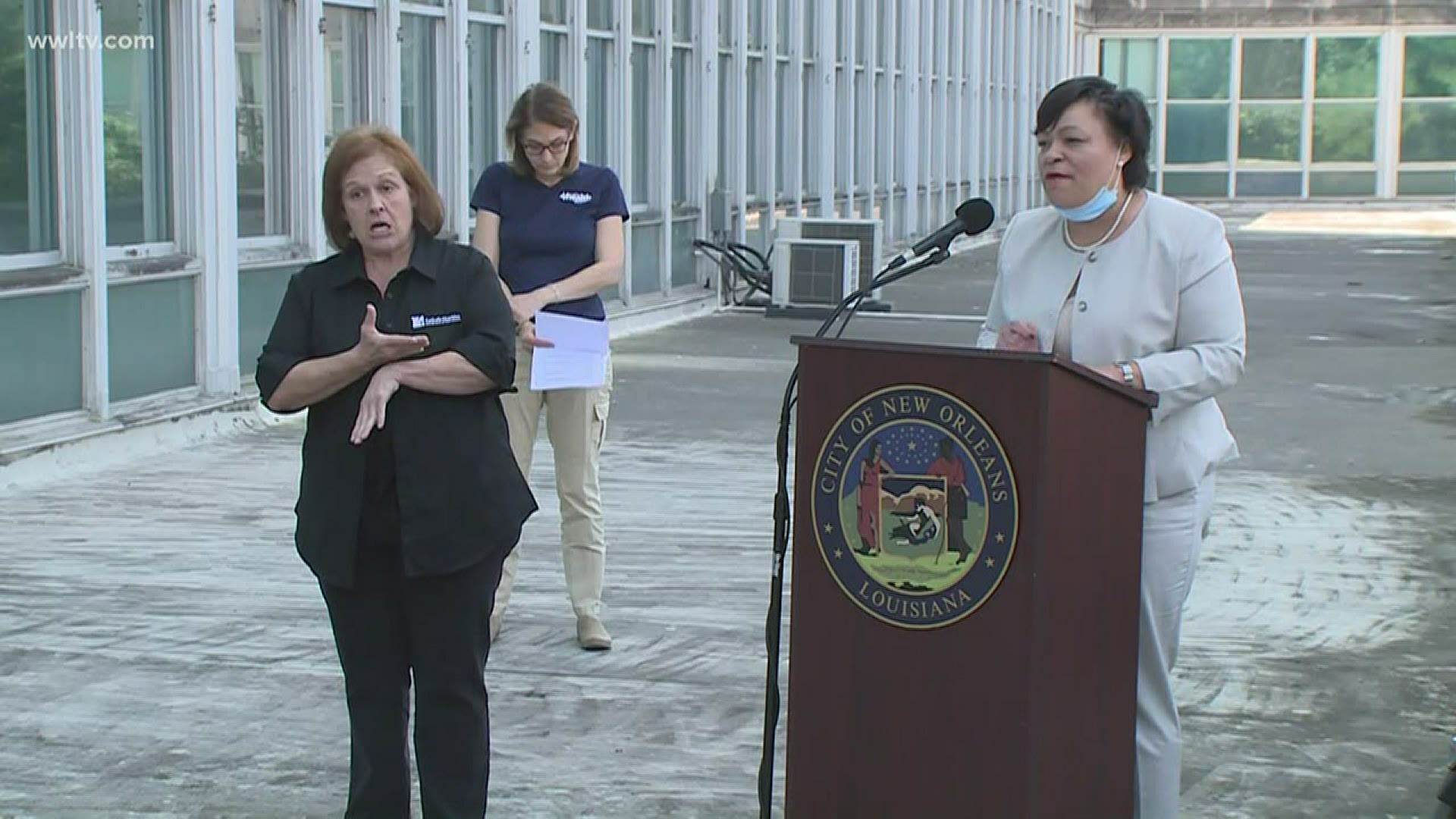 COVID-19 numbers continue to point to a plateau

The rate of COVID-19 cases, hospitalizations and ventilator usage has remained flat for the fourth day in a row, according to the latest data released by the Louisiana Department of Health Friday.

53 more patients lost their lives to the virus, a staggering number, but a 7% increase in total deaths --in line with the daily number of losses this week. The key is that the number has not continued to climb daily. There are now 755 dead in the state.

While hospitalizations decreased for the first time in the pandemic on Wednesday, they increased slightly on Thursday and have increased again on Friday, by 40, making it more likely that Wednesday was unfortunately a blip in the numbers, not a trend. There are now 2,054 patients in hospitals for COVID-19 treatment.

The number of ventilators available went in the wrong direction Friday as well, after improving the past three days. However, only six more people need ventilators from yesterday, which is still the slowest growing stat by far.

Edwards significantly reduced the number of ventilators he was asking for this week based on these numbers. There are now 479 people in need of ventilators across the state.

After announcing he had contracted COVID-19 last month, Archbishop Gregory Aymond has recovered from the coronavirus, and just in time for Good Friday and Easter Sunday.

And the 70-year-old came out of quarantine with a bang.

According to NOLA.com, Aymond took to the skies to give his Good Friday blessing to New Orleans, flying over the city in a World War II-era plane at 10 a.m. to do so.

He was followed by Rabbi Lexu Erdheim of the Gates of Prayer synagogue in Metairie, who then gave the citywide Passover blessing.

Aymond's recovery comes more than two weeks after he first announced he had tested positive for COVID-19 on March 23, a day after serving mass at an empty St. Louis Cathedral.

The coronavirus disease is not only taking a toll on the health of New Orleans residents, but it is also leaving the city financially strapped.

Cantrell said that the $2 trillion federal stimulus bill leaves out New Orleans because the city has less than 500,000 resident minimum requirements to apply for direct federal relief. According to The Times-Picayune | New Orleans Advocate, that means that the city will only be able to apply for aid to cover the money it directly spends battling the virus, and not for money to cover economic impacts from loss of conventions, festivals and sales revenue.

Gov. Edwards: 'There's a really good chance' schools closed for the remainder of the school year

The State Board of Elementary and Secondary Education has drafted a letter to the governor asking him to call off the remainder of the school year to in-person classes.

"There's a really good chance that I'm going to quickly do what they're asking me to do," Edwards said.

The drive-up Coronavirus testing site at the University of New Orleans will now close after testing is completed on Friday.

City officials confirmed the program will move to other parishes now ramping up their testing.

The city is working with local healthcare providers to stand up mobile test sites in communities with high numbers of Coronavirus cases and deaths.

“We are committed and will continue to ensure that testing is available to the communities that are hardest hit. To our most vulnerable communities and our communities of color,” New Orleans Health Director Dr. Jennifer Avegno said.

About 13,000 people were tested for COVID-19 at the New Orleans drive up sites. That’s 6% of the city’s population.

While most people are stuck at home following emergency stay-at-home orders, car burglars are back on the streets in New Orleans.

Over the past two nights, more than 40 cars have been broken into at four different apartment complexes in eastern New Orleans, according to residents and security officers there.

New Orleans Police Superintendent Shaun Ferguson acknowledged that after an initial lull during the coronavirus pandemic, the problem had been ravaging the city before the lock-down has flared up again.

“We received an unusual amount, I'd say, of auto burglaries this week compared to what we've been seeing since we've been under this state of emergency,” Ferguson said.

To combat the sudden surge, Ferguson said his officers are stepping up their tactics, including strategically deployed district task force officers.

Announced by Bagala's son, Tristan Bagala, on Facebook, the lawmaker's death at 54 marks the first COVID-19 death among members of the Louisiana Legislature.

Bagala began his political career as the Lafourche Parish administrator from 2014 to 2017, The Times-Picayune | The New Orleans Advocate reported.

Crescent City Classic will go on as a virtual race

A historic run in New Orleans is doing something, well, historic.

For the first time, the Crescent City Classic is holding a virtual race due to the coronavirus.

It’s not stopping runners like Matt Benoit from competing.

“I think being able to start in from of the Superdome, the city out there, the environment, the energy,” Beniot said, listing some of his favorite things about the race.

Fearing it may be canceled, he was surprised when he got an email saying otherwise.

"I didn't even know what a virtual race entailed, but after reading about it, I tried to understand what it was and didn't want to miss out on something that hopefully doesn't have to happen again," he said. "But it's awesome to keep the tradition going."

Race Director Eric Stuart understands it’s not ideal, but canceling the CCC was not an option.

On Thursday night, iconic sites across the country lit up blue to honor health care workers on the front lines of the coronavirus pandemic.

In Baton Rouge, so did the state capital, LSU's Tiger Stadium, the governor's mansion and more.

Churches getting creative to hold Easter mass while social distancing

With church congregations forced to stay home, those would be packed pews will instead be empty Easter Weekend, forcing churches to get creative with services.

On the Northshore, a group of pastors is revving up with a drive-in style Easter service in Bogalusa. Marcus Rosa, the pastor at Westside Emmanuel Baptist Church, is helping to put it all together.

The overwhelming need for ventilators has been addressed or emphasized by most local and state officials in the past month, but now some doctors treating the sickest patients from this pandemic have created an alternative.

The mechanical ventilator requires intubating. That means sedating a person and putting a tube down into the windpipe. But there are risks of trauma and pneumonia. So a team of LSU health pulmonologists, including Dr. Kyle Happel, explored using non-invasive ventilation.

They put a viral filter where the exhaled air comes out, to keep health care workers safe from virus droplets.

"We are seeing fewer people intubated now as compared to when we first started the COVID epidemic," he said. That also translates into people needing fewer ventilators and getting out of the ICU quicker."

Now they are being asked to pass on this knowledge to hospitals across the state and country.

'I want to say by the next day, I started feeling a little bit better' COVID-19 patient says after taking anti-malaria drug

COVID-19 patients in the metro New Orleans area are being treated with the drug President Donald Trump has touted as a "miracle" drug in the fight against the disease, hydroxychloroquine.

The anti-malaria drug has been used to safely treat a number of illnesses for decades, but its effectiveness in fighting COVID-19 is still anecdotal.

In an exclusive one-on-one interview with WWL-TV’s Katie Moore Wednesday, U.S. Surgeon General, Dr. Jerome Adams, said the federal government is collecting data on how hydroxychloroquine is being used and patients’ reactions to it in order to speed up the scientific research needed to prove that it’s safe and effective to use against COVID-19.

“We're also collecting data, and we're doing that in New Orleans, to make it so that we can very quickly adjust course if we find out that this medication is unsafe in this new population or if it's not effective,” Adams said.

The following is an update from WWL-TV investigative reporter David Hammer, who has been battling COVID-19.

It's been two weeks since my last post. Unfortunately, that's because I am on Day 13 of COVID-19 symptoms. It's been eight days since I tested positive for the virus.

Normally, I wouldn't post about anything personal, but I have been receiving messages and emails about news stories and have not had the strength to pursue any investigations or reporting.

I tried to help our team last week when the OSHA violations were issued for the Hard Rock Hotel collapse, but the fatigue COVID-19 causes can be overwhelming.

And like many others, I experienced a "second wave" of new symptoms on Day 10 that made me feel like I needed to go to the hospital. I had terrible pressure in my chest that caused a panic attack and made it hard to determine if the illness was causing shortness of breath.